Castelbarco Albani estate is characterized by homogeneous green areas with different functions. Along the side of the current main entrance (west side) lies a long and orderly row of linden trees (Tilia Cordata or Tomentosa). Initially the alley arrived out of the wall that today surrounds the House.
This wall was built by the Counts Quintavalle when they took possession of the property in 1950. After crossing the gateway starts the Italian style garden. On the side of the lindens there is a big green area, today used for forage cultivation. 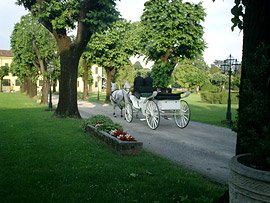 In the past the Count Bruno Antonio Quintavalle organized this big green area as an equestrian route with natural hurdles made of privet hedges (Ligustro Ovalifolium) still partly visible today. Near the South Wing of the Villa we can still find the Italian-style Garden.
Four magnolias from Virginia (Magnolia Grandiflora) about 200 years old each, frame a level garden. The Italian-style garden box hedges (Buxus Sempervirens) enclose grassy parterres with geometric shapes. In the center, between two bald cypresses, there is a stone fountain that complete the idea of perfect order of the garden.
In the past the main entrance was between the two Empire-style buildings to create astonishment and surprise to the guests who visited the Villa: the perspective eye-catching was certainly sensational. 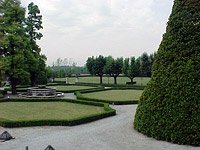 Parallel to the main entrance there is another narrower street along which grow decorative mulberry trees. On the opposite side there is the former botanical garden surrounded by a wall. In the XIXth century the buildings inside were used as greenhouses. Near the small theatre there is a large group of bamboos (Bambu Metoke) more than 200 years old. This green, close and high (more than 12 meters high) group in the past had an ornamental and constructional function: bamboos were used to build scaffolds and retaining structures. 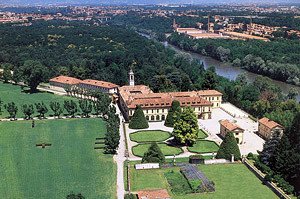 In the east side the park changes: the romantic suggestions of the English-style garden takes the place of the geometry of the Italian-style garden, where the vegetation follows a primordial idea of nature. Walking along the alley you can notice the change in the greenery both for the steep slope towards the Martesana Canal and for the bigger quantity of water in the ground. The slope has timber trees called by the neighborhoods “bagolari or spaccasassi” (because they are able to go deep into the most rocky grounds), that are native of Australia.
The role of these trees, today as it was in the past, is to avoid that the bank folds up due to the heavy rain. there is A wonderful group of copper-beech trees (Fagus Selvatica Purpurea and Tricolor) and a Korean magnolia (Magnolia Conspicua) surrounds the recently built swimming pool. Though delimited by the cement of the pool, the magnolia is one century-old. In late spring the bloom offers a charming show, for both color and fragrance. Two beautiful one-century old hollies close the first part of the bank that from here onwards continues its steep descent.

In this environment, the presence of several trees of the same family help their breeding. If you observe carefully you can notice that around certain groups of trees there are lots of tiny plants all of the same family. In this part of the park two big centuries-old oak trees are noteworthy (Quercus Ilex); unfortunately a lightning struck one. Going on in the botanic trail on the right you can observe centuries-old trees as lindens (Tilia Tormentosa), yews (Taxus Baccata), camaciparis (Chamaecyparis), while on the left side the effect of the human presence is clear on the landscape: small arches, underpasses, tuff steps create a picturesque scenery, all perfectly integrated in the natural landscape. The wood creates a highly suggestive semidarkness, in complete contrast with the brightness of the Italian-style garden. 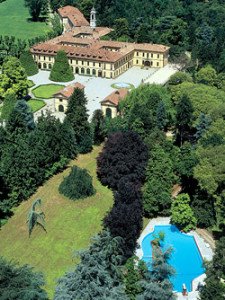 Near the Naviglio canal, when you have gone through the iron bridge, on the left you can find a variety of cedar (Atlantic Cedar) interesting for its chandelier shape obtained through years of patient work. For this characteristic and its exceptional proportions this tree is the most relevant element of all Villa Castelbarco’s botanical garden. Next to it there is a group of evergreens members of the same family (Cedar Deodara) in order to protect the Atlantic Cedar from the North winds. Before walking back up towards the Villa we meet a woody fenced area known as “The Wood”. It was once the game reserve of the Castelbarcos but today several animals live here, protected but completely free: in particular there are almost 80 deer that can be observed in their natural habitat. This is a rare example of faunal conservation.

For information about guided tours of the park, please call 0290965254 or send an e-mail to info@villacastelbarco.com